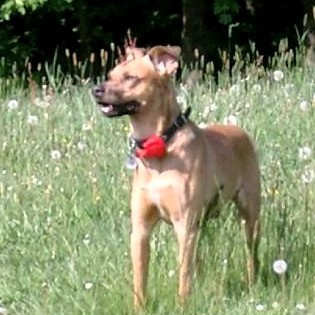 His life did not start under a good star. He was born in Tenerife as a street dog and had apparently no contact at all with people during the first weeks of his life. Moreover some young people came up with the hideous idea of burning the puppies. Some of the pups were well enough to be rescued by dedicated people and were sent to Germany. We got to know Strolch in the animal shelter as a completely shy dog who refused any human contact. In November 1995, after the death of our Jonas, we brought this troubled bundle home to us.

It was a very long road to travel, which we would not have made without our Chica, but it was worth it. At home Strolch became a wonderful and normal dog. He chose his dog friendships himself. Anyone he did not like was ignored. Strolch went over the rainbow bridge at about 16 and a half years on 4 May 2011.